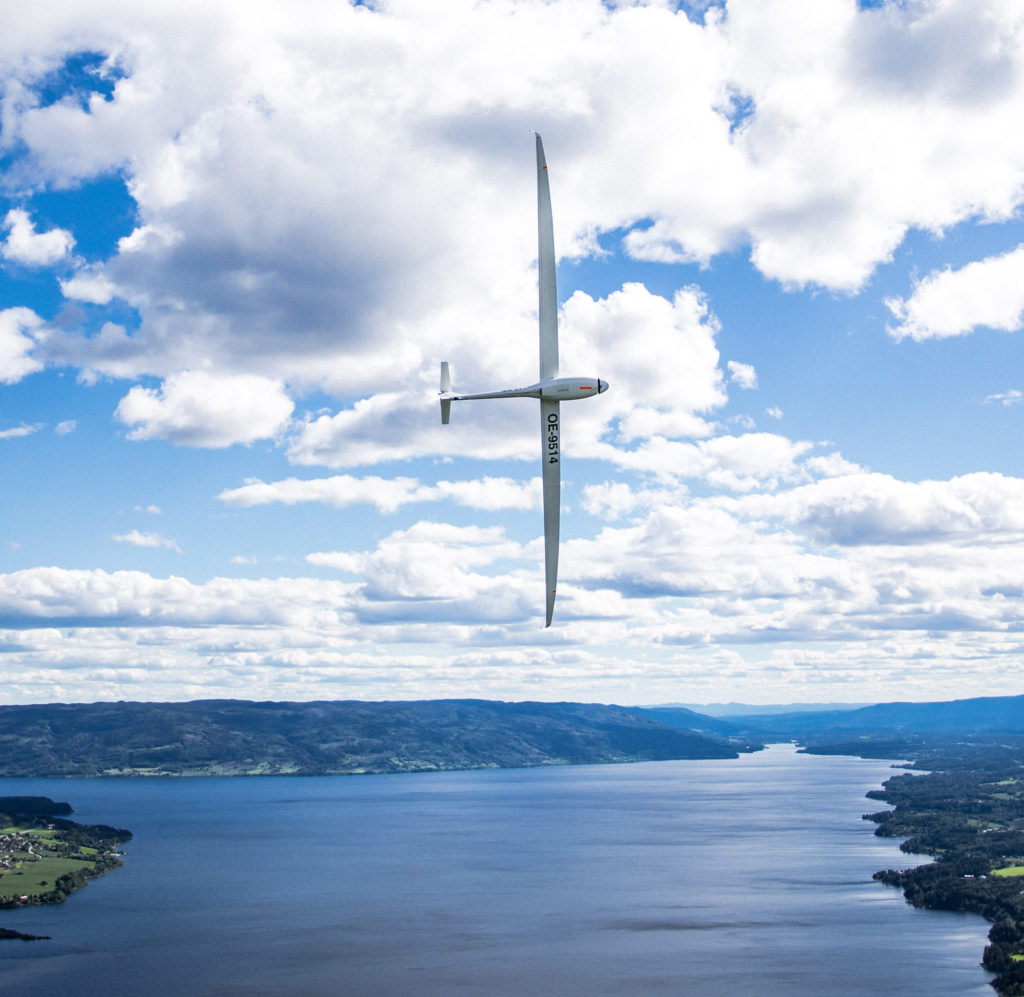 This June, the annual Stemme Horizon Tour centered on Eggemoen, north of Oslo, Norway. This was a truly international event with pilots, instructors and organisers from Europe and far away places such as New Zealand, Australia, USA and South Africa.  Seven aircraft arrived, mostly the new S12 model,  some privately owned and others from Mountain Soaring and Stemme itself.

Martin Kroke shares his experience of this year’s event. 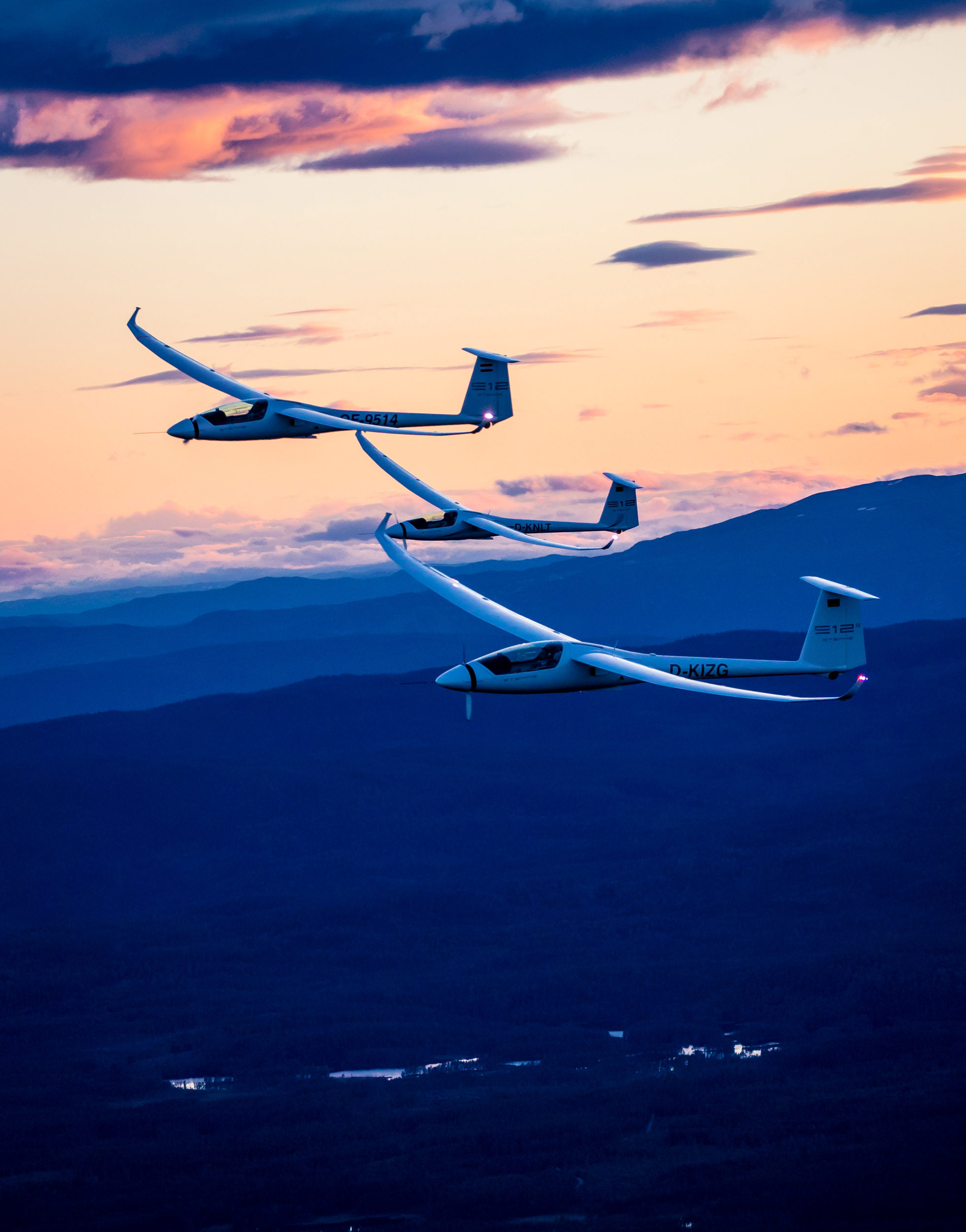 Hoenefoss Airport, Eggermoen, was built by the Germans in WWII using Russian prisoners of war, and completed in 1994 as a staging post for large fighter aircraft. After the war it was used by the military and airlines and finally an industrialist Ola Tronrud, purchased the land in 1999 and developed it into a modern industrial estate with its own brand new 2100m asphalt runway.

Ola welcomes us, offering a large briefing room in one of the hangars.  There is plenty of space for our fleet of 25m wingspan aircraft.

First arrivals waste no time climbing into their allotted Stemme aircraft for first exploratory flights in the area.  Albert from South Africa, climbs straight out of a taxi into an S12 and flies off to make the most of the remaining day.

Stemme Horizon Tours make use of the best hotels closest to the event and the Hotel Sunvolden is no exception.  Dinners provide the opportunity to recount the day’s flying adventures over this picturesque region.

Weather conditions are forecast to improve every day.  In the end we only had one non-flying day, which we used to explore the surrounding area and some of the high tech industries on the airfield estate.

The last two days we see longer soaring flights towards the high mountain ranges and glaciers.  Today I am flying with Elizabeth from Miami.  Right after takeoff, we enjoy a stunning view of the long lake Randsfjorden to the north.  We test the thermal strength underneath the first cumuli with the engine running and after the third cloud we decide to shut down and enjoy pure gliding flight from then on.

As we settle into the thermal climb, the unique propeller stowing goes smoothly – idle the engine to cool for a couple of minutes, switch off the ignition, pull the propeller brake, centre the propeller and hide it away by closing the nose cone. The aircraft is now a sleek high performance sailplane, with its hidden turbo powered propulsion system ready for instant use.

We continue to climb under the cloud and at its base we set course along the Adal towards the Jotunheimen mountain range in the northwest.  The landscape from the air is breathtakingly beautiful and characterized by lakes, deeply cut valleys and plateau-like areas with many small lakes, alternated with light covered coniferous trees and rocky areas.

Elizabeth continues to work the lifting air under the clouds, maintaining altitude in straight flight, rather than circling.  By maximizing the use of the available energy, the cross country speed shoots up.  We change course in favour of a nicely developed cloud formation to the west and fly in fast dolpin-style directly under a cloud base towards the mountains.  The high potential of the Stemme S12 is now in full swing – when we hit rising air we pull up, gaining 1000ft, slowing down in positive flap to maximise our time in the thermal. Before we hit the adjacent sink, flaps go negative and we accelerate on track, now faster than before and a little higher.

The closer we get to the mountains, the clearer it becomes that we will not be able to reach our today’s goal, Norway’s largest fjord, Sognefjord.  Scattered showers and a storm front from the west, behind the high mountains, prevent us continuing on our present track, but the view of the snow covered mountains and glaciers is mesmerizing.

Back at the hotel we all recount the day’s experiences.  Some had flown in formation, another landed at the beautiful Klanten airfield, having passed the fabulous waterfall with its rainbow, several times.

After a week of magical flying, we had all made many new friends and were already wondering where the next Horizon venue would be in 2020.  On departure day, we disperse homeward bound across the globe with amazing memories.

Adapted from the original text by Martin Kroke and Thilo Harsdorf.